Pulsating Pharynx: Not to be Ignored

Occasionally, but rarely, patients demonstrate pulsating anatomical structures in the pharynx, more specifically from one or both lateral walls (1). The rhythmic, pulsating timing and appearance of these movements are very similar to that of the regular beat of the heart.

The internal carotid artery (ICA) along with the external carotid artery (ECA) arises from the common carotid artery (CCA) and bifurcate at the level of cervical vertebrae 3 or 4.  The ICA is slightly larger in diameter than the ECA and is deep in the neck to the ECA.  ICA Is the primary carrier of blood to the brain and particularly supplying the forebrain area and connecting to the Circle of Willis. 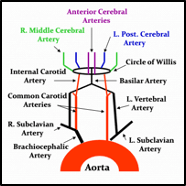 The ICA lies approximately 2.5 cm from the internal mucosal surface separated by the pharyngeal musculature of the neck.

Pulsating pharynx may be asymptomatic, present as a foreign object feeling in the throat, dysphagia, or change in voice. Pulsating is attributed to pronounced anatomical variations of the ICA and is found in 5% to 8% of the general population (1).

The cause is an uncommon variation in the ICA branching resulting in tortuous or kinking of the vessel, and is termed, “Aberrant ICA.”  Aberrant ICA develops either as a degenerative vessel wall change due to hypertension, fibromuscular dysplasia, and atherosclerosis or as a congenital vessel deformity (2).

Imaging using CT, contrast MRI, or angiography are the gold standards for diagnosing (3).  While the ENT literature is sparse on aberrant ICA, reports caution ENTs to be very careful during simple pharyngeal surgical procedures. Penetration of the pharyngeal wall could result in catastrophic bleeding (3).  Aberrant ICA can be misdiagnosed as an abscess or tumor (2).

As FEES clinicians, the discovery of pulsation in the pharynx should be an automatic referral to Otolaryngology, and its possible implications discussed with the medical staff.